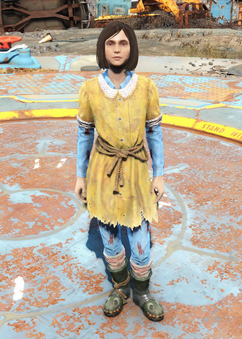 “Something you need? If you're not a customer, you're trouble, so what'll it be?”

Kat is a traveling merchant who can be encountered in the Commonwealth in 2287.

Kat is a young girl roaming the wastes as a merchant, protected by her sentry bot, Gus. She sells a small assortment of junk and a small amount of ammunition. Meeting her is a random encounter.

If one kills her robot Gus, she will say, "You killed my only friend." After that, the Sole Survivor will not be able to talk to her and she will stand still at her last position.

As a child, Kat cannot be targeted in V.A.T.S., nor can she take or inflict damage.

Kat appears only in Fallout 4.

Kat and Gus
Add an image to this gallery
Retrieved from "https://fallout.fandom.com/wiki/Kat_(Fallout_4)?oldid=3172044"
Community content is available under CC-BY-SA unless otherwise noted.