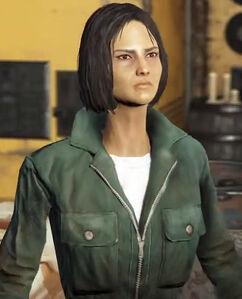 Where You Belong
Close to Home

“What if I told you that there's a secret. A big secret. Here on this island. Something way more important than just one lost girl?”

Kasumi Nakano is a runaway mechanic and technical expert taking refuge in Acadia in 2287.

Kasumi Nakano is the daughter of Kenji Nakano and Rei Nakano. She and her grandfather used their mechanical knowledge to restore the pre-War appliances around her house.

After restoring a radio and contacting DiMA, she is led to believe that she is a synth;[1] this is reinforced by her inexplicable dreams about waking up in a lab and innate mechanical ability,[1][2] although she does have her own doubts as to if this is the truth,[3] nor can she prove it.[4]

She later flees to Acadia, although she can be convinced to return after completing the add-on. If Far Harbor, the Brotherhood of Steel, or the Institute attack Acadia, she will die in its defense.

She is curious and empathetic, as shown by her pursuit of DiMA's radio signal and her desire to help the people of Acadia. When she was living with her parents, she was frequently bored, as she was isolated from the wasteland in her remote home. Her grandfather's passing worsened this feeling of boredom.

* If the Sole Survivor becomes an enemy of Acadia, Kasumi will fight to defend it.

Kasumi Nakano appears only in the Fallout 4 add-on Far Harbor.

Retrieved from "https://fallout.fandom.com/wiki/Kasumi_Nakano?oldid=3430630"
Community content is available under CC-BY-SA unless otherwise noted.