Karma in Fallout 2 is basically the renamed "General Reputation." Changes include: Reputation titles are kept, and a 'reputation' statistic is added.

Like in other games, Karma is how you are generally perceived in various places by various people. It may have an effect on how others interact, mostly in dialogue.

Karma is, philosophically, the principle of cause and effect, with the effects of your actions but also your intentions that are take into account measured in point called "Karma points". The more an intention or an action have a major impact, the more you win or lose more or less Karma points.

It is classified by three types: good, neutral, and evil. Players always start a new game with 0 Karma points, a neutral Karma. People will behave differently toward you depending upon your Karma, and it's also a factor to unlock certain dialogue options or able to do something specific. Wanted posters with the player characters name on them will also be put up across numerous locations if one has a low Karma value or the Childkiller reputation title.

Your Karma status is defined by a "Karma title", depending of your Karma points.

Specific Vault Boy images were going to appear to represent the Karma titles, but probably due to an oversight, they don't appear in-game and a specific image that includes all the Karma titles is put in their place.

The recruitment of the companions is sometimes affected by Karma: 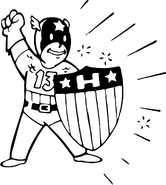 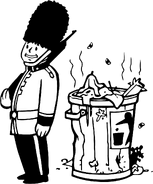 Guardian of the Wastes, +750 Karma points 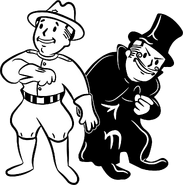 Savior of the Damned, +1000 Karma points
Add a photo to this gallery 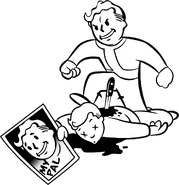 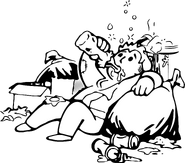 Scourge of the Wastes, -750 Karma points

Demon Spawn, -1000 Karma points
Add a photo to this gallery
Retrieved from "https://fallout.fandom.com/wiki/Karma_(Fallout_2)?oldid=3318286"
Community content is available under CC-BY-SA unless otherwise noted.