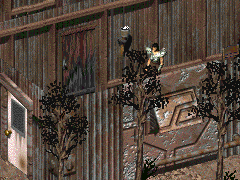 Karla is a member of the New Khans around 2241.

She is a tough-looking woman who wears metal armor. She would be pretty if it were not for the scars that line her face.[1] While the Chosen One is fighting Phil in front of the shack, she will come out and take aim with her sniper rifle to assist the latter.

Rescue Chrissy: As one of the New Khan guards, she needs to either die or be convinced to leave another way, in order to get to Chrissy.

Karla appears only in Fallout 2.

Retrieved from "https://fallout.fandom.com/wiki/Karla?oldid=3073144"
Community content is available under CC-BY-SA unless otherwise noted.