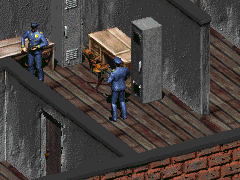 “Lot of folks look up to him because he's a councilman, but not me. He thinks he's a big man, like the law don't always apply to him. I'd like to take him down a notch or two someday.”— Karl on Frank Carlson

Karl is Sheriff Dumont's deputy in 2241.

Karl is a young man, barely out of his teens, who has joined the NCR Police force and became Sheriff Dumont's deputy. He is eager to please and prove that he is worthy of the position, at the same time still keeping his youthful ideals of equality before the law close to his heart. In addition, he has a keen sense of observation, giving him insight into his workmates and events in the big city.

He is also a New California Rangers sympathizer, working closely with Elise.

Karl can direct the Chosen One towards President Tandi if asked about work opportunities. He will also grant them access to the cell that Oswald, the raider spy, is being held in.

Retrieved from "https://fallout.fandom.com/wiki/Karl_(NCR)?oldid=3073143"
Community content is available under CC-BY-SA unless otherwise noted.