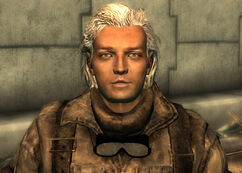 “Well, well. I haven't had a customer in a while. The last one I had was a bit chewy... you know what I mean?”

Karl is 37 and was married to a woman named Skyler. Both of them lived together in Meresti before she passed. They were once owners of a shop in Megaton, and Vance met them while gathering supplies. He had felt a strong kinship with them and invited them to join him. Karl is very gruff and has a short fuse; he prefers not to speak to people. He is always highly suspicious of people and prefers to think the worst of them. Karl is distinguished by his unusual haircut: long blond hair, which is not common for a man of his bulky stature.[1]

Karl doesn't believe in Vance's vampiric teachings but plays the part in order to keep his store in the Meresti Metro Station.

Retrieved from "https://fallout.fandom.com/wiki/Karl_(Fallout_3)?oldid=3212805"
Community content is available under CC-BY-SA unless otherwise noted.