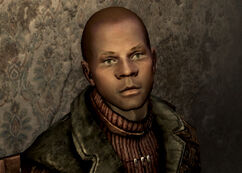 “My name is Karl. Glorious Caesar has sent me as an emissary to the Great Khans as a token of our alliance.”

Retrieved from "https://fallout.fandom.com/wiki/Karl_(Fallout:_New_Vegas)?oldid=3294652"
Community content is available under CC-BY-SA unless otherwise noted.