Protect the ghouls in the cathedral

Kansas City is the ninth or tenth mission in Fallout Tactics.

Some seconds after you arrive, the ghoul town will be ambushed from three directions: north, west, and south. You can talk with the Bishop three times to get some anti-radiation supplies, but as radiation is only an issue toward the end of the mission, this can wait till you've cleared out the mutants.

You have three objectives for this mission:

To defend the cathedral you most likely want at least five team members. A sniper/machine gunner (probably your worst squad member) should go north, possibly with some grenades to throw. Two small-gunners, one with perfect small guns skill and one with a good bursting weapon, should go to the west. The rest should go to the south gate, preferably a sniper and two big-gun members. Focus the sniper on the heavily armored mutants, who are carrying more than just a pipe. The mutants appear from nowhere and at the south and west gates, they come in waves.

This gate bears the least of the brunt of the mutant assault. It is already defended with landmines and five ghouls. The ghouls however, only take occasional pot-shots at the mutants. However, since only about six mutants attack this gate, mostly with melee weapons, it can be defended with a single member of the party. Send someone like Farsight with a sniper rifle and a shotgun. Note that it is possible to leave this gate unmanned by a team member, or at least remove them after the first few mutants.

This gate is more heavily attacked, but mainly by mutants with melee weapons. There are a couple of mutant snipers on the towers, however. The attacks come in waves, about three total, separated by a little time, so don't think that the attack on this gate is over after the first couple of waves. Place two team members here, such as a sniper and a gunner, or two machine gunners. It is possible to trap the area in front of this barricade with landmines, but your time is probably better spent placing your other team members.

This gate takes the brunt of the attack. You'll want the rest of your team here. They should be heavily armed snipers and big-guns types. You can put a couple of team members on the walls by this gate if you run them fast enough, though it's debatable whether this is worth the effort. You'll definitely need to push the mutants back on the ground, anyway. Destroying the mutant barricades awards a "clearing" bonus, even if there are mutants still around. There are three mutants at the extreme south end, which may or may not join in the melee. If not, you can take them out later with your full squad. Some of the mutants at this gate will have rocket launchers and miniguns. A good tactic is to use snipers to cripple an arm of such mutants so that they cannot use their big guns against you.

During the invasion, you must not allow more than five ghouls to die. This is especially difficult as some of the ghouls are positioned at the front of the action. This is primarily the reason why you'll need to advance on mutant barricades at the south gate. Reports vary on whether fewer ghoul deaths alter the outcome. After this mission, you should be able to recruit ghouls from Brotherhood barracks. Of note, however, is that the ghouls guarding the gates are all armed with sniper rifles, so be sure to loot the bodies of any dead ghouls and/or steal some from the survivors.

The later part of this mission, killing the three super mutant commanders (one being Juggoknot), can be resolved using sneak or heavy guns. Simply move from tent to tent and clear it out, taking advantage of ammunition types vs. armor or bursting with a M249 SAW or a Browning M2. You can get a Pancor Jackhammer in the tent with the third command to make it easier to sneak. Tommy gun is located in the north-east building (at the airfield). 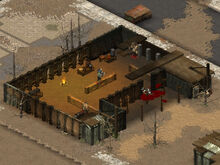 First Commander location (1 on the map) 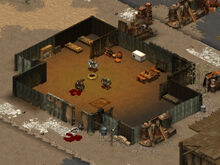 Second Commander location (2 on the map) 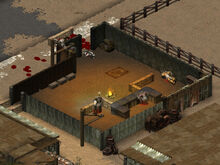 Third Commander location (3 on the map)
Community content is available under CC-BY-SA unless otherwise noted.
Advertisement