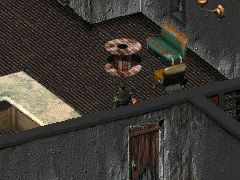 Dispose of merchant
Dispose of Jain
Take down Decker

“No, let me clarify--if you don't watch it, I'll be wearing your ass for a shoe.”

Kane is the bodyguard and the right-hand of Decker by 2161.

The Underground's second most powerful man, Kane's intimidating presence is usually stationed at the Maltese Falcon's door to the basement. Like many hired hands in a bar that do not handle the mixing of drinks, Kane's primary job was to serve as a warning: any misbehavior is not tolerated. However, more importantly, Kane forms the first line of defense for his boss, the local crime lord Decker.

Decker, who holds court in the basement of the Maltese Falcon, has been having trouble from both sides of the law: Hub police deputy Tony Fry is known to be gunning for the crime lord, and merchants such as Daren Hightower want the Underground out of the way for better business dealings.

Unlike the relatively stable antagonism in Junktown, allegiances and politics shift rapidly in the Hub, and former noncombatants, strangers, and even allies often quickly became threats. This is particularly prevalent in the face of Decker's plans for expanding his "empire". Kane's installation was a matter of practical self-preservation.

If the Vault Dweller refuses only one hit contract, they will never be allowed to see Decker again, and Kane will turn hostile after three additional dialogue attempts.

Kane appears only in Fallout and is mentioned in the Fallout Bible.

Retrieved from "https://fallout.fandom.com/wiki/Kane?oldid=3362437"
Community content is available under CC-BY-SA unless otherwise noted.