Wasted on Nukashine
The New Arrivals

The Kanawha Nuka-Cola plant is a location in the Forest region of Appalachia.

Before the war, Kanawha Nuka-Cola Plant was the regional marketing and research and development facility to test how the people of Appalachia liked their upcoming products, such as the codenamed products, "Whale Shark", "Orca", and "Albatross", as well as Nuka-Cola Quantum, Nuka-Cola Black, Nuka-Cola Orange, and Nuka-Cola Quartz.[1] It also partook in the development of the beverage that would become Nuka-Cola Cranberry.[2][3] By 2103, the plant would become instrumental in the Vault 76 overseer's plan to create a widespread means of inoculation to the Scorched Plague.

Through the main entrance is a small reception area and proceeding forward up a small staircase and through a large doorway there is a large open lobby consisting of numerous labs and tasting areas, there is one lab on the right of the room next to a tasting area and a utility tunnel leading to the factory floor while on the left is a storage area. Around five Scorched can spawn in the main lobby area. There are two staircases on the right and left leading up to the labs and catwalk and at the end of the lobby is another doorway leading to the factory level, a much grimier, concrete, area filled with a number of Scorched.

The Kanawha Nuka-Cola plant appears only in Fallout 76.

Inside the plant, there is a bronze Earth with a circling rocket stylized as a Nuka-Cola bottle. This is a reference to the logo of Interplay Entertainment, the original publishers of Fallout and Fallout 2.

The Kanawha Nuka-Cola plant lights up at night

Evening at the soda plant 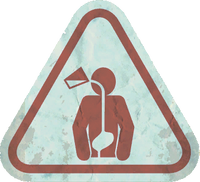 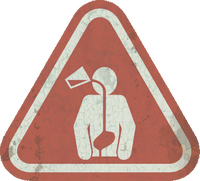 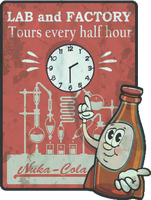