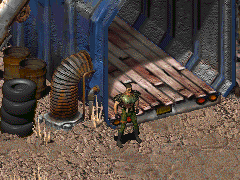 “Junktown is a friendly place, friend, and we want to keep it that way.”

Kalnor is a guard in Junktown around 2161.

He initially greets the Vault Dweller upon their first visit to Junktown. If they have a weapon drawn, he will tell them to holster it. When asked about Junktown, he will passively admit that the name does have comical value, but that he personally likes it nonetheless. He works for Killian Darkwater, stating that Killian does not tolerate unprovoked violence in Junktown.

If asked about his position, he will state that he is a guard, and his job is to keep watch for strangers entering the town. Although Junktown often trades with the Hub, he is not too fond of the "stuck up bastards"[1] that live there.

Kalnor appears only in Fallout.

Retrieved from "https://fallout.fandom.com/wiki/Kalnor?oldid=3362418"
Community content is available under CC-BY-SA unless otherwise noted.