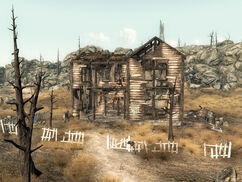 Top floor of the ruined Bed and Breakfast

Kaelyn's Bed & Breakfast is a location in the Capital Wasteland. It has been badly damaged by fire and is used as a hangout by raiders in 2277.

The building is located on a hillside with a destroyed bridge in front of it to the north. It is southeast of the town of Arefu, north of the entrance to Vault 106, and southwest of Fordham Flash Memorial Field.

Most of the floors and walls are damaged but are still relatively intact. There are two levels, with a ramp at the rear leading to the second floor due to the lack of stairs.

The center of the bridge has completely collapsed, requiring any traveler using the road to detour off road and go around the ramps.

Six raiders and a raider guard dog inhabit the location. Two of the raiders move about the building interior and another armed with a heavy weapon accompanied by a raider guard dog patrol its immediate vicinity. One raider guards the west end of the broken bridge north-east of the inn while the two others loiter below, in the wreckage of the broken section of the bridge. These inhabitants respawn every 72 hours.

In addition, the number of hostile inhabitants may be augmented by a 'Type B' random encounter, the patrol route of which is centered on the east side of the bridge.

Retrieved from "https://fallout.fandom.com/wiki/Kaelyn%27s_Bed_%26_Breakfast?oldid=3355812"
Community content is available under CC-BY-SA unless otherwise noted.