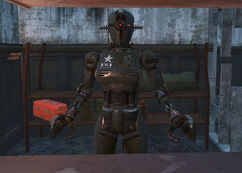 Kill or Be Killed, Goodneighbor

“Everything here is guaranteed to injure, maim, or kill at your discretion. Except me. I only kill when I want to.”

KL-E-0 is an Assaultron that resides in Goodneighbor and acts as a merchant. She owns the store Kill or Be Killed, which is located directly next to Daisy's Discounts. She sells Partystarter, a unique missile launcher.

If KL-E-0's terminal is hacked, it is revealed that she has a contingency to kill several members of the Goodneighbor community, if the need arises.

Her plan to eliminate the Neighborhood Watch is to wait for a super mutant or raider attack, planting high explosives at key areas of the defensive perimeter, and post-detonation, relocating immediately due to Goodneighbor's vulnerability.

KL-E-0 has a contingency plan in case her original plan fails:

She understands that collateral damage may be possible but considers losses acceptable without too much disruption to her business.

KL-E-0 seems to hold a certain amount of respect for Magnolia, considering her a fellow working girl and willing to give her a chance before sudden termination. Her contingency consists of burning down The Third Rail as a warning. Should she resist after that, a simple clean shot to the head would be the outcome.

On the second floor of her building, one can find a holotape named Join the Railroad. Whether or not she actually supports The Railroad is unclear.

The Robotics Expert perk allows hacking into her system and turning her into a normal Assaultron. It will suspend her trading function temporarily and can return to a normal trader after choosing shutdown/activate while she is still following the player around in Goodneighbor.

Retrieved from "https://fallout.fandom.com/wiki/KL-E-0?oldid=3397486"
Community content is available under CC-BY-SA unless otherwise noted.