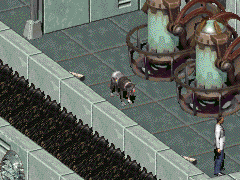 “The life fuctions of my master appear to be terminated. Are you my new master?”

K-9 is an advanced cyberdog and a potential companion in 2241. He was created by Dr. Schreber and has abilities that extend beyond that of a normal cyberdog.

K-9, unlike most cyberdogs, is fully sentient and has been modified with vocal organs, allowing him to communicate verbally in several languages. His high intelligence allowed him to develop his own sense of morality, which brought him at odds with Dr. Schreber and his unethical experiments; despite being programmed to work as his assistant, he came to hate the sadistic scientist with a passion. This eventually culminated in him one day biting Schreber, who then punished him by disabling his legs, forcing him to stand still like a statue and watch the doctor's horrible experiments.

After getting his motivator repaired, K-9 was left in NCR by the Chosen One so that he could receive necessary repairs from Dorothy and, not long after his recovery, Dr. Henry (who had been placed in critical condition after being reportedly assaulted by the Chosen One sometime earlier).

Dr. Henry, afraid that too much information about the Enclave would be obtained from K-9, attempted to destroy the cyborg but was stopped by the cyberdog and Dorothy, who suspected what Dr. Henry was planning. The NCR government used the attack as an excuse to confiscate K-9 and the cyberdog in order to learn more information about the Enclave as well as what makes the two of them "tick." At last report (and over Dorothy's objections), K-9 and the cyberdog were disassembled and analyzed. Structural damage during the disassembling is reported to have killed them both.[1]

K-9 appears only in Fallout 2.

Retrieved from "https://fallout.fandom.com/wiki/K-9?oldid=3352002"
Community content is available under CC-BY-SA unless otherwise noted.