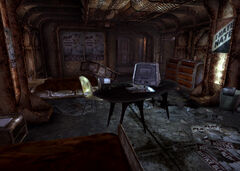 It can be found in Vault 11's living quarters, on Roy Gottlieb's personal terminal in a room on the lower level, just above mid-center map.