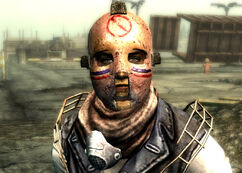 “Get the formula and meet us at the Red Rocket Tricycle Factory as we planned. Our buyer is promising lots of caps, so I want to see some hustle! This could take our gang to the big time.”— Goalie Ledoux, Finding the formula paper note

Just for the Taste of It is a unmarked quest available only until The Nuka-Cola Challenge has been completed. After that, the Sudden-Death Overtime gang won't spawn anymore in front of the Red Racer factory.

The formula is inside a locked safe in one of the walls of the R&D Department. The R&D room is the first room on the left as the player enters the Nuka-Cola plant (there are no signs for the "R&D" department except for the word "RESEARCH" written on one of the walls). The safe requires a key to open. To acquire Research Dept. safe key|the key, the player must find the Mister Handy robot named Milo at the lower level of the factory floor. The player can pass a Speech challenge to convince the robot to give them the key, or if they have the Robotics Expert Perk, Milo will give it to them automatically. Otherwise, the player can look for a note by the computer in the office next to R&D (Storage and mixing vats) called Welcome to the Nuka-Cola family!, that contains ID data allowing them to pass the ID check. If all else fails, the Lone Wanderer can acquire it in uncivilized ways by simply destroying the robot.

Getting it to Goalie Ledoux[edit | edit source]

The Red Racer factory is less than a mile northeast of the Nuka-Cola plant. Ledoux and two members of his Ice-Gang team will be waiting for the player in front of the factory entrance. Ledoux offers 250 caps for the formula, or the player can try to convince him to give them 400 by passing a Speech challenge. If you find the formula and find Mercier, Ledoux will be waiting outside the Red Racer factory even if "The Nuka-Cola Challenge" quest is not active. After selling the formula to Ledoux, you can kill him to get it back, although there appears to be no incentives apart from the recipe being worth 150 caps. However, you can get Ledoux's hockey mask for killing him, which looks like a normal hockey mask but grants +25 to Action Points, and he will have a finger on him if you have the Lawbringer perk.

The original advertising slogan of Diet Coke when it was invented in 1982 was "Just for the taste of it!"

Retrieved from "https://fallout.fandom.com/wiki/Just_for_the_Taste_of_It?oldid=3244351"
Community content is available under CC-BY-SA unless otherwise noted.
... more about "Just for the Taste of It"
RDF feed
Has platform
PC +, Playstation 3 +  and Xbox 360 +