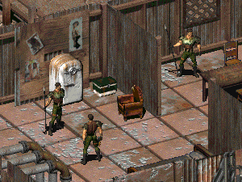 “You'd better behave, since it's the law, and I enforce the law. Put your weapon away, don't draw it unless in self-defense, and you won't have a problem with us guards.”

Junktown guards protect the town of Junktown from various dangers in 2161.

If the Vault Dweller brandishes any weapon, the guards will tell them to put it away. If he doesn't, the Junktown guards will become hostile.

Apart from the unnamed guards, there are three named ones:

Junktown guards appear only in the original Fallout.

Retrieved from "https://fallout.fandom.com/wiki/Junktown_guard?oldid=3139977"
Community content is available under CC-BY-SA unless otherwise noted.