Fallout 4
“Sick of carrying around all that useless stuff? Load it into the Junk Jet, and shoot it at unsuspecting enemies. You haven't lived until you've killed someone with a teddy bear.”— Fallout 4 loading screens

The Junk Jet is a weapon in Fallout 4.

The Junk Jet was created by a ArcJet Systems technician who was belittled by his coworkers. Sick of being mocked for only having a high school education, regularly reading science magazines, and being the butt of jokes about him attending shop class, he decided to get revenge. He created the Junk Jet to showcase his skills, and to murder the engineers who were mocking him. Fortunately for his potential victims, he intended to use the Junk Jet on Monday, October 25, and the Great War that Saturday meant his revenge never happened.[1]

Similar to the Rock-It Launcher from Fallout 3, the Junk Jet fires any junk item loaded into its hopper, such as a wrench. Items must be loaded in manually, and fired items can be picked up after being shot, making this a ranged weapon with theoretically unlimited ammunition. In practice, however, items will (about 10% of the time) be lost upon contact with the enemy as they are no longer interactable. This sometimes results in flung items floating in the air with no support, unable to be picked up or moved.

The damage per shot and damage per second values are uncertain as the Junk Jet does much more damage if the shot is charged for approximately 1 second. It is unclear whether 40 damage is the base damage per shot or the charged damage. The statistics block is currently reflecting the base rate of fire of very nearly 1.666... shots/sec, times the listed damage. The time to charge up a shot is very close to 1 second, so the charged shots/sec is 0.625, but again, the exact damage is unclear.

The range limitations on the weapon are largely irrelevant as projectiles follow a parabolic trajectory, dropping significantly beyond effective pistol range. This makes the weapon impractical for long-range fire unless the shooter can 'lob' shots and still hit the target.

The weapon has no hard limit to its 'magazine' capacity. When reloading, the game pauses and a container interface is opened. Any junk item can be loaded into the Junk Jet. There does not seem to be a container limit (tested with approximately two thousand pieces weighting over five hundred weight units of junk), but the contained junk still counts against carry weight. Therefore, the practical ammunition capacity is highly subjective, as it is only dependent how much weight in junk one is willing to carry, and one can fire the weapon indefinitely without any reload needed until the hopper is exhausted. The ammunition counter will never show more than 999 no matter how much is loaded into the hopper.

One effective strategy for the Junk Jet is to use a common, light item. Steel works well, as one can quickly refill by scrapping near-worthless weapons at a workbench. Another strategy is to use something with zero carry-weight, such as pre-War money. 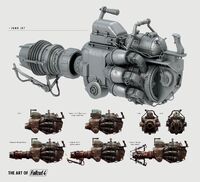