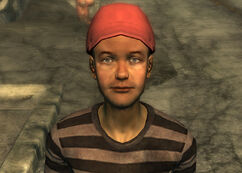 “Dad says that I shouldn't want to leave Andale, but I do!”

Jack "Junior" Smith is the son of Jack Smith and Linda Smith and resides in Andale in 2277.

Son of Jack and Linda Smith, he seems to get along well with his young neighbor, Jenny Wilson.[2] He is supposed to marry her when he grows up, just as every Andale boy marries the girl closest to his age.[3][4]

According to Old Man Harris, Junior is the result of inbreeding, as his parents are brother and sister.

Junior Smith appears only in Fallout 3.

Retrieved from "https://fallout.fandom.com/wiki/Junior_Smith?oldid=3331831"
Community content is available under CC-BY-SA unless otherwise noted.