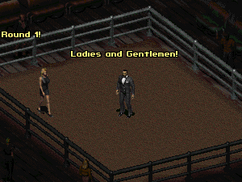 “Let's get reeeeeeeady to BEAT SOME ASS!”

The Jungle Gym ring announcer is the announcer during the Chosen One's boxing matches against his possible four opponents during the quest Become a Prizefighter.

The announcer's job is to do some advertising before the match, introduce the boxers to the crowd, start the bout and do all this with great enthusiasm.

If a boxer tries to cheat (ex. hitting below the belt), he will immediately announce the opponent as the victor. The other option is a win/defeat by knockout.

The Jungle Gym ring announcer appears only in Fallout 2.

Retrieved from "https://fallout.fandom.com/wiki/Jungle_Gym_ring_announcer?oldid=3344629"
Community content is available under CC-BY-SA unless otherwise noted.