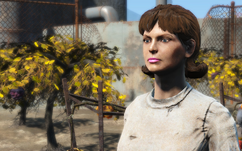 June Warwick is a farmer living at Warwick homestead in 2287.

June is the wife of Roger Warwick and mother of Wally and Janey. She helped the Atom Cats when they were starting out by donating food and they have enjoyed a mutual relationship since. She suspects her husband is a synth but has no evidence to support this.

When talking about tough times, the conversation leads to a medium Speech check, which, if passed, will prompt her to give the player character five Dandy Boy Apples.

When asking why the Warwicks don't hire guards to protect their farm, June erroneously refers to her husband as "Robert."

June Warwick appears only in Fallout 4.

Retrieved from "https://fallout.fandom.com/wiki/June_Warwick?oldid=3292163"
Community content is available under CC-BY-SA unless otherwise noted.