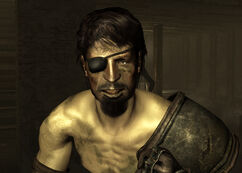 “Well it's about time somebody put that bastard out of his misery!”— Sonora Cruz

Junders Plunkett is a hostile outlaw in Arlington House in 2277.

Ever since the Regulators have been bothering his raider brethren, Junders has sought solace surrounded by the ancient dead, cultivating a shrine to a mystical figure from ancient history named "Lincoln." Plunkett spends his time drinking wine, and polishing his spiked knuckles.[1]

The Bounty notice: Junders Plunkett states that he is wanted for murder and theft in Canterbury Commons.

Junders only appears in the game if the player character has the Lawbringer perk, and he will attack on sight. If killed, Junders Plunkett will have a unique finger on him which can be turned in for the bounty to Sonora Cruz, with 1000 caps paid as a reward. One does not need to kill Plunkett personally to get credit. Plunkett can die from any means, and the finger will be on his corpse.

Junders Plunkett appears only in Fallout 3.

Junders Plunkett's victims may have included Derek Pacion's parents (Louis Pacion and Daisy Roe). The bounty notice states that he is responsible for theft and murders in Canterbury Commons; this matches up with the fact that Derek Pacion's parents lived in Canterbury Commons and were murdered by Raiders. If this is true, it also makes sense why the bounty on him would be so high because Uncle Roe would have taken the murder of his sister and brother in law very personally, and being the Caravan manager means he has a lot of financial clouts, so this could explain why the bounty on Junders Plunkett is so much higher compared to other criminals.

Retrieved from "https://fallout.fandom.com/wiki/Junders_Plunkett?oldid=3185931"
Community content is available under CC-BY-SA unless otherwise noted.