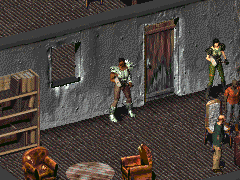 The name "Julio" appears only in combat. Outside combat, he is called a "Hub guard."

Julio appears only in the original Fallout.

Retrieved from "https://fallout.fandom.com/wiki/Julio?oldid=3275311"
Community content is available under CC-BY-SA unless otherwise noted.