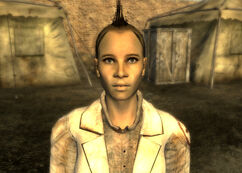 G.I. Blues
High Times
I Could Make You Care
Nothin' But a Hound Dog
Cry Me a River
Wild Card: Finishing Touches
Long-Term Care
Short-Term Treatment
Friend of the Followers

“We arose from the Boneyards of Adytum years ago. Since then, we have made it our mission to rebuild the wasteland and reeducate its inhabitants. We hope to forge a brave new world free of war and poverty by sharing knowledge and resources. Our primary goal is the free exchange of ideas.”

Julie Farkas is the regional administrator of the Followers of the Apocalypse operating out of the Old Mormon Fort in Freeside in 2281.

Julie Farkas administers of the struggling New Vegas branch of the Followers of the Apocalypse.[1] Aside from research, the Followers provide food to Freeside but are ill-equipped to readily provide medical services. They take whatever donations they can, but no one has been generous enough to lend medical supplies to them. What they really need is a steady supplier of medicine.[2][3] According to her, it would be a godsend if the Followers were able to secure a regular supply of medicine, but the Crimson Caravan is too steep, so the Followers need to think locally. Additionally, a couple of people used to be great assets before they became chem addicts.[4]

As administrator to the New Vegas branch of the Followers, she knows much about the surrounding Freeside neighborhood, including information on the ruling gang known as the Kings, and the unsavory businesses in Freeside.[5][6][7] Even though it is outside of her duties as regional manager, Farkas has tried to make peace between the NCR squatters and the Freeside locals, but has had no luck.[8]

Julie Farkas appears only in Fallout: New Vegas, and is mentioned in the add-on Old World Blues.[11]

The character model of Julie Farkas has a spiked, punk hairdo, a nod to Nicole, the founder and leader of the Followers of the Apocalypse in the original Fallout.

Collector's Edition player card
Add an image to this gallery

Retrieved from "https://fallout.fandom.com/wiki/Julie_Farkas?oldid=3344541"
Community content is available under CC-BY-SA unless otherwise noted.