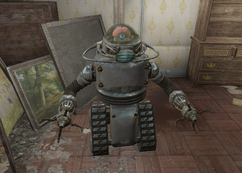 “If you ask me, it's one of those actors...or that horrible painter. Their type is always the cause of violence.”

Julianna Riggs was a wealthy financial advisor and late wife of Bert Riggs. She worked with Ezra Parker and other investors in the development of Vault 118 in Cliff's Edge Hotel to house the premier guests of the hotel and low-class residents after a nuclear fallout. After the luxury area of the vault was built, Ezra stopped sending money to Vault-Tec Corporation. Quickly after that, the low wealth wing of the vault construction was halted.

Julianna and her husband had moved to Vault 118 before the Great War. They had moved most of their belongings from their mansion into a vault room, including some cats and Bert's laboratory appliances. She appeared to be germophobic and had a radiation arc and a cleaning drone installed at his door.

After the bombs hit all other guests made it into the vault, including her boss and hotel's financier Ezra Parker. After some time she and all the vault dwellers were turned into a robobrain and they lived on. They were then locked out of the overseer's office.

After some investigation, Julianna found a way into the overseer's office and found information about Ezra's plan to embezzle her and the other investors. Julianna confronted Ezra at the vault's atrium and after a heated argument, Ezra broke her brain tank with a baseball bat and covered the area with red paint. After that he changed his tie onto Julianna´s body and took her mask, taking her identity until a detective uncovers it.

Julianna Riggs appears only in the Fallout 4 add-on Far Harbor.

Retrieved from "https://fallout.fandom.com/wiki/Julianna_Riggs?oldid=3305557"
Community content is available under CC-BY-SA unless otherwise noted.