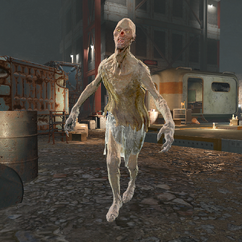 Julian, at some point between the Great War and the Sole Survivor arriving at Vault 88, was turned into a feral ghoul. Valery Barstow expresses surprise when Julian attacks the Sole Survivor and attempts to get him to stop. The only course of action is to kill him, prompting Barstow to suggest the player kills the remaining feral ghouls in the vault as well to put them out of their misery.

Julian appears only in the Fallout 4 add-on Vault-Tec Workshop.

Retrieved from "https://fallout.fandom.com/wiki/Julian_(Vault-Tec_Workshop)?oldid=3109010"
Community content is available under CC-BY-SA unless otherwise noted.