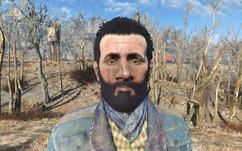 Jules is a third-generation synth traveling with Fred and Angie through the Commonwealth in 2287.

Jules is met during the Self Admitted Synth random encounter. By the time the Sole Survivor arrives at the scene of the random encounter, Fred states that he and Angie have been traveling with Jules for weeks. They probably created a friendship during that time, which made Jules feel secure enough to reveal his true identity.

Shocked and angered, Fred holds Jules at gunpoint and threatens to kill him, fearing that the runaway synth would send The Institute after them. Angie encourages Fred to do it. Jules is discriminated against the whole time and tries to convince Fred to free him so he can go to Bunker Hill.

It's up to the Sole Survivor to decide Jules' fate. The player character can choose between:

When first encountered, Jules will have his hands raised over his head and Fred and Angie are discussing killing him. Jules will admit to being a recently escaped synth and begs for mercy. The Sole Survivor can either kill Jules or pass one of three independent medium-level speech checks to quell the situation and set him free. The Sole Survivor can also choose to attack Angie and Fred, and if Jules survives the fight, he will give the Sole Survivor a small number of caps. If Jules is alive at the conclusion of the encounter, he will run towards Bunker Hill.

Jules appears only in Fallout 4.

Jules in the Self Admitted Synth encounter
Add a photo to this gallery
Retrieved from "https://fallout.fandom.com/wiki/Jules_(Fallout_4)?oldid=3315154"
Community content is available under CC-BY-SA unless otherwise noted.