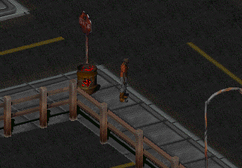 Find out who was responsible for Richard Wright's overdose
Deliver a laser pistol to Eldridge
Suspect: Jules

“Slaver, if you ain't talked to Jules, you don't know HALF of what New Reno gots to offer.”— Jules speaking to the Chosen One with the slaver reputation.

Jules is a denizen of New Reno and its self-proclaimed greeter in 2241.

At first glance a black man in a worn suit, Jules welcomes people to the big city with his silver tongue and gold plated teeth. He operates near its entrance and will offer to tell any newcomers all about the city, including arranging a discount for those shopping at New Reno Arms. Jules will rent his tongue for pretty much anyone, long as he's paid to advertise for them. He also sells drugs, of course.

His flashy style and silver tongue are a cover for his darker side, as he will do anything to keep himself afloat, including tipping off T-Ray's crew about the Highwayman parked downtown and even murdering a child, when he rats him out.

Jules will tell the Chosen One freely about the city, but asking about the families costs the Chosen One. Once paid, this opens up several conversation options that provides hints to many, many quests in the city.

Jules appears only in Fallout 2.

Retrieved from "https://fallout.fandom.com/wiki/Jules_(Fallout_2)?oldid=3344090"
Community content is available under CC-BY-SA unless otherwise noted.