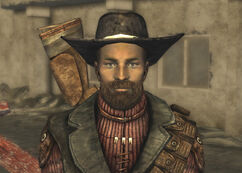 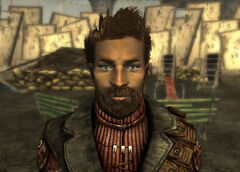 Jules without his hat

“Listen, warrior, there are two kinds of folks. You load your gun like an ordinary man, or you load it like a devil.”

Jules is a town guard living in North Vegas Square in 2281.

Jules is a survivalist and a gunslinger, and respects others whom he considers fellow "wasteland warriors." He once roamed the deserts of the wasteland before deciding to find a place to settle down, eventually arriving in North Vegas Square. Jules elected to stay to protect the local residents and traders passing through town from the Fiends and hostile wildlife. The survivalist and Crandon, plus a few other guards, patrol the community for squatters, thieves and other unwelcome people looking to cause trouble. With their help, North Vegas remains to be a small, but a fledgling trading settlement with enough food and resources to support its residents.

When talking about North Vegas, Jules reveals that he would prefer to stay in a hut or the sewers, rather than risk having a building collapse on him.

The image of Jules found on his card in the Collector's Edition playing cards depicts a Caucasian male with a red beard, while his race is set as an African American male in-game.

Jules on the Collector's Edition playing card
Add a photo to this gallery
Retrieved from "https://fallout.fandom.com/wiki/Jules_(Fallout:_New_Vegas)?oldid=3235978"
Community content is available under CC-BY-SA unless otherwise noted.