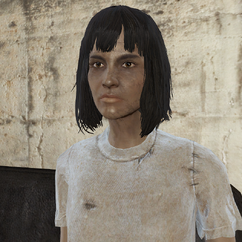 The Price of Memory

“You try having somebody botch a mind-wipe on you, and see how if feels. Then get back to me, okay?”

Jule is a synth living in Acadia on the Island in 2287.

Jule (previously named Victoria) is a female synth living in Acadia in 2287. At an unknown point, Victoria escaped from the Institute and found her way to Far Harbor and then to Acadia. She was a friend to the residents there, until she was swayed to go on a boat ride with Faraday. She felt very nervous about the ride, but was apparently comforted by Faraday's looks.[1]

The boat crashed, with Victoria receiving severe damage to her head, resulting in Faraday having to mind-wipe her in order for her brain to function properly. But there was an issue with the mind wipe, resulting in Jule now mentally damaged, jumping between two distinct personalities in her speech, and having severe issues with her memories.[2] By the time the Sole Survivor arrives, she is very moody and sarcastically angry. She refuses to speak to the player character until the quest Data Recovery. She apparently suffers from nightmares about the crash, and only confides in Cog.

Although she states that she will be leaving Acadia following the end of The Price of Memory, she will simply sit on the ground outside of the observatory.

Jule appears only in the Fallout 4 add-on Far Harbor.

Retrieved from "https://fallout.fandom.com/wiki/Jule?oldid=3292771"
Community content is available under CC-BY-SA unless otherwise noted.