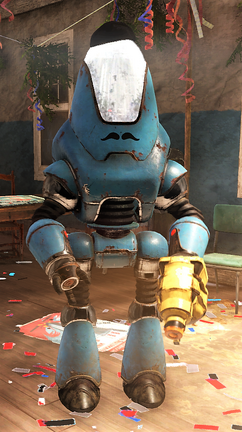 Jubilant Decorator is a Protectron operating in Helvetia as part of the Fasnacht Day festivities in 2103.

When Fasnacht Day is being celebrated, it is one of the Protectron parade marchers which may be encountered. If it is required to march in the parade, it can be found in the red barn across the street from Helvetia's post office and workshop. It will request that the player character(s) decorate the Helvetia barn before it will march in the parade.

In 2102, the Jubilant Decorator wore the Fasnacht goblin mask when marching in the parade. In 2103, the Protectron wears a random Fasnacht mask with an alternate color scheme.

Jubilant Decorator appears only in Fallout 76.

Retrieved from "https://fallout.fandom.com/wiki/Jubilant_Decorator?oldid=3388954"
Community content is available under CC-BY-SA unless otherwise noted.