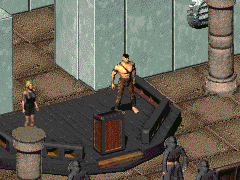 “Juan: A poor child of the waste.
Vikki: Perhaps an alignment would help?
Juan: Yes. You. Would you like an alignment?”

Juan Cruz is an extremely attractive dark-haired man.[1] Together with Vikki Goldman, he has made hundreds of films, many of them classics, such as "Top Bun," "Frisky Bizness," and "Days of Rubber."

Retrieved from "https://fallout.fandom.com/wiki/Juan_Cruz?oldid=3179275"
Community content is available under CC-BY-SA unless otherwise noted.