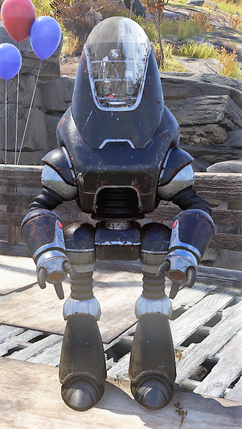 Joyous Musician is a Protectron operating in Helvetia as part of the Fasnacht Day festivities in 2103.

Joyous Musician is one of the Protectrons which was reprogrammed to spice up Fasnacht Day celebrations in Helvetia.[1][2] It can be distinguished by its black chassis and melodic (for a robot) voice.

When Fasnacht Day is being celebrated, it is one of the Protectron parade marchers which may be encountered. If it is required to march in the parade, it can be found on the bandstand across the street from Freyja's Haus Restaurant. It will request that the player character(s) play music on stage with it before it will march in the parade.

In 2102, the Joyous Musician wore a Fasnacht skull mask when marching in the parade. In 2103, the Protectron wears a random Fasnacht mask with an alternate color scheme.

Joyous Musician appears only in Fallout 76.

Joyous Musician onstage
Add a photo to this gallery

Retrieved from "https://fallout.fandom.com/wiki/Joyous_Musician?oldid=3481823"
Community content is available under CC-BY-SA unless otherwise noted.