Joshua Eric "Josh" Sawyer is a video game designer active in the role playing game genre. After Chris Avellone left Interplay, Sawyer became the lead designer of Van Buren (the canceled Fallout 3 by Black Isle Studios) before he himself left in November 2003. At Obsidian Entertainment, he was the lead designer and project director of Fallout: New Vegas, a standalone game based on Fallout 3's engine and gameplay.

Starting as a Web Designer at Black Isle Studios, he quickly worked his way up the ladder to an associate designer position and then lead designer on Icewind Dale II.

While at Black Isle he was known for coming up with the "Ex-Presidents" project naming system. When Interplay closed down Black Isle Studios many team members ended up at Obsidian Entertainment, which would eventually come to include J.E. Sawyer.

After the cancellation of Van Buren, Sawyer left Black Isle and joined Midway Home Entertainment to work on Gauntlet: Seven Sorrows. On July 19, 2005, GameSpot announced that he had left Midway. He was preceded in that move by memorable game designer John Romero, who left work on the Gauntlet remake in June 2005.

In 2005, Sawyer was employed by Obsidian Entertainment to work on Neverwinter Nights 2. Sawyer was the project director and lead designer of Aliens: Crucible, the canceled role-playing game based on the Alien film franchise. He was the project director and lead designer on Fallout: New Vegas, which was released in October 2010. He also wrote and performed several songs for Fallout: New Vegas: "Cobwebs and Rainbows," "Home on the Wastes," "New Vegas Valley," and "Streets of New Reno."

While at Black Isle Studios, Sawyer mentioned several times that he'd like to make a Fallout: Resource Wars spin-off. 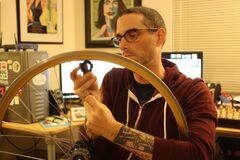 Josh Sawyer working on a bicycle wheel
Screen Shot 2013-07-13 at 16.22.35.png
Joshua Sawyer as a young Legionaire
Add a photo to this gallery