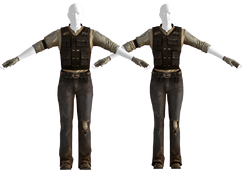 Joshua Graham's armor is a set of armor in the Fallout: New Vegas add-on Honest Hearts.

The personal armor of Joshua Graham, the armor consists of a white collared shirt with rolled-up sleeves embroidered with Dead Horses tribal markings, heavily patched and stitched blue jeans with a hole in the left knee, a snakeskin belt with magazine pouches, and a pre-War Salt Lake City police department SWAT ballistic vest.[1]

Additionally, the armor has a sleeve garter on the strong/firing hand to ensure the sleeve doesn't distract the user.[2] Completing the outfit are a pair of boots and a belt made from rattlesnake skin.[3]

This set of armor provides the same level of protection as a suit of combat armor, at less than a third of the weight. It features the fourth highest DT in the light armor class, surpassed only by the Sierra Madre armor, Vault 34 security armor and Sierra Madre armor, reinforced, all three of which also weigh twice as much as Joshua Graham's armor. The DT/weight ratio of 15 to 8 is only surpassed by the all-purpose science suit with 13 to 2, as well as Ulysses' duster and the Courier's duster from Lonesome Road with 13 to 3.

It is found in the footlocker that the player character appears in front of at the end of Honest Hearts, or it can be taken from Joshua Graham's corpse if he is killed.

“Joshua was inspired by a lot of different characters and things. The apostle Paul, Rodrigo Mendoza (Robert DeNiro's character from Roland Joffé's "The Mission"), T.E. Lawrence aka Lawrence of Arabia, and others. His outfit was designed to feature body armor but look somewhat "old west"/preacher in style -- hence the low-collar white shirt, sleeve garter, and the cut of the ballistic vest. The rattlesnake skin on his belt, shoes, and gun are symbolic but also intended to reflect that "western" feeling. The stitched patterns in his shirt were supposed to be tribal markings from the Dead Horses and were inspired by a scene from The Mission where Mendoza receives patterned body paint from the Guarani. I remembered a white dress from PJ Harvey's White Chalk tour where she had lyrics stitched into the cloth in black thread and I just put the two ideas together.”— J.E. Sawyer, Formspring response from May 27, 2011
“Lanius' armor seemed inappropriate for Graham. Though it's unlikely that Joshua would have worn the same clothes then that he does when you meet him in Honest Hearts, there weren't a lot of other appropriate clothes for him and his outfit does make him stand out as particularly unusual - which, even among the Legion, he was.”— J. E. Sawyer, (when questioned on why Joshua Graham doesn't wear a traditional Legion's armor)

SLCPD stands for "Salt Lake City Police Department" and SWAT is an acronym for special weapons and tactics. Joshua himself never mentions how he got his armor.

Joshua Graham before he was set aflame