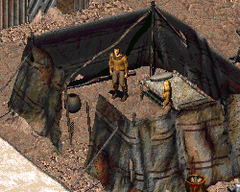 Joshua with his wife Amanda in their tent

“Thanks for bailing me out. I appreciate it. Me and the wife'll be moving on soon.”

Joshua is an outsider living in the Vault City courtyard.

Joshua is a scruffy-haired young man with a sheepish smile.[1] Shortly before the Chosen One arrived in the city for the first time, Joshua was drinking in John Cassidy's bar when Citizen Sergeant Stark and his men arrived. Joshua was taken away for resisting apprehension and was going to spend the rest of his life as a servant in Vault City. Needless to say, this left Amanda and Curtis, wife and son respectively, quite distraught.

The Chosen One can elect to save him from servitude. Once he is freed, he leaves the city with Amanda and Curtis.

Joshua appears only in Fallout 2.

Retrieved from "https://fallout.fandom.com/wiki/Joshua_(Vault_City)?oldid=3344075"
Community content is available under CC-BY-SA unless otherwise noted.