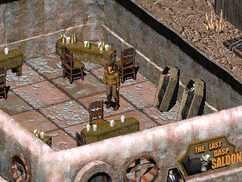 “I've been spending time reburying people in the graveyard next door. Someone - or something - keeps diggin' 'em up. Dunno why. I mean, it ain't like they have anything valuable on 'em.”

Josh Laurence is an undertaker-come-bartender of the Last Gasp Saloon and Funeral Parlor in Redding in the year 2241.

A tall, thin man who cannot seem to rid his habit of measuring everyone up[1], Josh Laurence is the owner and bar tender of the Last Gasp Saloon, a combined funeral parlor and bar for the miners, converted when he failed meeting ends just by burying people. He is a rather odd person, with a tendency to make puns focused on his role as the town's undertaker.

His business got even worse when wanamingos started pushing up the graves and bringing the dead to the surface, forcing Laurence to re-bury them continuously. This was the primary factor that made Josh convert his establishment into a bar.

Laurence offers beer at $5 per bottle or $10 for a round of companions, and gives some hints about wanamingo activities in Redding. He is also the source of many graveyard puns.

Josh Laurence appears only in Fallout 2.

Retrieved from "https://fallout.fandom.com/wiki/Josh_Laurence?oldid=3073132"
Community content is available under CC-BY-SA unless otherwise noted.