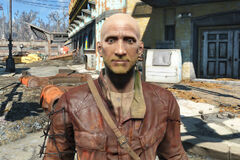 Josh is a deceased member of the Minutemen in 2287.

Josh was among the Minutemen squad under Colonel Hollis during the Quincy Massacre. When Clint a former 10 year veteran of the Minutemen betrayed them, he was one of 20 people that escaped under the command of Preston Garvey. His body can be found in the back of the Super Duper Mart with his holotape on his body. With Emma, he is one of the two minutemen that Preston Garvey is referring to when talking about how there were eight survivors and now there are only five.

Josh's holotape, along with Emma's, suggest that the other survivors of the Quincy Massacre, led by Garvey, holed up in the Super-Duper Mart only to be driven out by a pack of feral ghouls, leaving four dead that Emma and Josh, returning from some errand, discovered. They were then killed by the ghouls themselves.

Josh appears only in Fallout 4.

Retrieved from "https://fallout.fandom.com/wiki/Josh_(Fallout_4)?oldid=3180651"
Community content is available under CC-BY-SA unless otherwise noted.