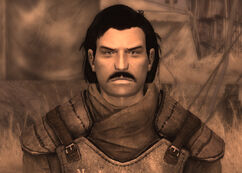 Restoring Hope
No, Not Much

“It's no picnic, I'll tell you that much. My troops are out here every day dying for the NCR, but they've left us out to dry.”

Major Joseph Polatli is the commanding officer of Camp Forlorn Hope in 2281.

Having joined the NCR Army at an unknown date, Polatli was eventually promoted up the ranks to major and placed in command at Camp Forlorn Hope, the NCR's most forward base in its ongoing war with Caesar's Legion. Originally meant to be holding the line or even setting up a staging area for later offensives against the Legion, Forlorn Hope quickly found itself besieged as Caesar sent legionairies across the Colorado River, occupying the towns of Nelson and Cottonwood Cove to the south.

Overworked and stressed to the limit, Polatli has a whole set of crises facing him on a daily basis at the start of the game's events in 2281. Camp Forlorn Hope is undermanned, having neither the strength needed to effectively hold position nor the ability to launch any offensives. The base is also badly short of medical supplies, all manner of gear and equipment, food, water and ammunition. Casualties are constantly coming in, whether from patrols or supply runs that Polatli sends out, or from and Legion raiding parties from Nelson. Added to this are the ongoing issues with radio communications, making it difficult for Polatli to effectively communicate with his superiors or request any kind of needed support.

In dialogue, Polatli makes it clear that while he is doing the best he can with a bad situation, morale at Camp Forlorn Hope is declining and his own is no exception. Merely holding the base perimeter is a difficult task to say the least, and Polatli feels he does not have the ability to risk even more lives by trying to hit back. If the Courier steps in on the side of the NCR, however, his tone changes as the issues around camp are each improved on or resolved completely. Polatli steadily becomes more confident and battle-ready, and tries to have his men prepared as well as they can be before they assault Nelson. After the battle, he is very grateful to the Courier for making victory possible, but remains disciplined and focused afterwards.

Retrieved from "https://fallout.fandom.com/wiki/Joseph_Polatli?oldid=3131110"
Community content is available under CC-BY-SA unless otherwise noted.