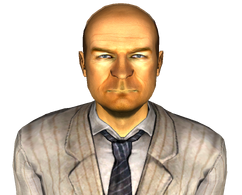 “Him? When his ticket came up, they burned him alive on a pile of tires.”— Boxcars

Joseph Steyn came from the Hub and was the mayor of Nipton before Caesar's Legion took over the town. Upon becoming mayor of the town, he had Tony the Tinker fix up a terminal for him to utilize. Planning to be mayor of the town for a year or two, he found himself making a 15% cut (negotiated from 20%) of profits from prostitution areas, specifically NCR soldiers from the Mojave Outpost seeking sexual services from two prostitutes, Rose and Sylvia.[1] Shortly after, upon learning of the prison break, Steyn negotiated with the newly formed Powder Gangers by sending out two "emissaries," known as Little Jim and Big Jim, offering business proposals to the gang, with sexual endeavors from Rose and Sylvia as an additional merit. The Powder Gangers would arrive during the day, while NCR troops would arrive during the night, offering a mutual benefit to Steyn.[2]

Eventually a mysterious young man, who called himself "Mr. Fox," made Steyn an offer of 8,000 caps, revealing himself as a member of Caesar's Legion and being aware of the situation Steyn had created in the town, asking the mayor to allow him and several Caesar's Legion legionaries to round up all of the Powder Gangers and NCR personnel, the former for harassing Legion raiding parties on the west side of the Colorado River, and the NCR for various reasons. Planning to return to the Hub and run for office, Steyn accepted the proposal and decided to begin stockpiling supplies at a safehouse between Nipton and the Mojave Outpost, in case he had to make a speedy getaway from Nipton back to the Hub, making two journal entries to document the events One can be found on his personal terminal in the office on the top level of the Nipton Town Hall, and the other at the Nipton Road reststop.[3] On the day of the lottery, Steyn had negotiated with the Powder Gangers to stage a kidnapping of NCR troopers for a ransom and stealing their equipment.[4] Instead, the legionaries captured the entire town and killed off most of the citizens, crucifying some. They held a lottery to determine each citizen's fate. When Steyn's ticket came up, Vulpes Inculta ordered him to burn alive as punishment for his and the town's greed and disloyalty to those it had sheltered.[5]

Although not included in the final version, at one point Joseph Steyn was to appear as an actual NPC, probably as a corpse, but was cut before Fallout: New Vegas was released.

Joseph B. Steyn is mentioned only in Fallout: New Vegas.

Retrieved from "https://fallout.fandom.com/wiki/Joseph_B._Steyn?oldid=3328122"
Community content is available under CC-BY-SA unless otherwise noted.