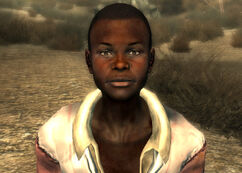 “I'm Joseph, and as the oldest kid in Lamplight, I'm pretty much a teacher by default. I also try to keep the kids clean and fresh-faced.”

Perhaps as a result of his age (or the fact that he'll have to leave soon), he has taken it upon himself to hold classes to educate other Lamplighters, covering whatever he feels they need to know (or whatever they show interest in). When not occupied teaching, he spends his time working on his computer or researching old textbooks that were long ago scavenged from Vault 87.[1]

His little sister is Penny.

In the mornings he teaches kids in the classroom, and afterward, he can be found down by the water in the Great Chamber.

Joseph appears only in Fallout 3.

Retrieved from "https://fallout.fandom.com/wiki/Joseph_(Fallout_3)?oldid=3313589"
Community content is available under CC-BY-SA unless otherwise noted.