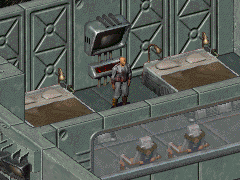 “Well, let's see... Deathclaws appear to be mutated Jackson's Chameleons, the horned variety. There are a lot of similarities still present, but an even greater number of differences. The mutation factor is quite high. This species is highly intelligent, about the equivalent of an eight-year-old, with some individuals reaching human normal level. Their learning capacity is very high and they are capable of abstract thought and reasoning.”— Joseph about the intelligent deathclaws

Joseph is a herbalist who serves as the doctor for the residents of Vault 13, namely the deathclaws in 2241.

Joseph was gathering herbs one night, when he heard a voice asking him if he was dedicated enough to his profession to heal "someone whom many would consider an enemy." Having responded that he would, Joseph was approached by a group of deathclaws, of which one had been shot. Joseph said that he could not work on the injured deathclaw where he was, so the others blindfolded him and brought him to their home in Vault 13; Joseph has remained there ever since, and has accepted the fact that his patients are deathclaws.

Joseph is allowed to leave Vault 13 at his leisure to collect medical supplies, but once he was curious if he was ever followed by the Deathclaws. In order to test this, Joseph stayed in a town for a week or so before returning to Vault 13, where he was greeted by the pack leader, Gruthar, with open arms; Gruthar also thanked Joseph for coming back in private.

From his time among the deathclaws, Joseph has become very knowledgeable about their species. He reveals them to be mutated Jackson's Chameleons, incredibly intelligent with a high learning capacity, and able to speak in a manner similar to that of a parrot. He also considers their sense of morality to be well defined, follow a strict code of ethics, and will avoid violence as a solution.

Joseph appears only in Fallout 2.

Retrieved from "https://fallout.fandom.com/wiki/Joseph_(Fallout_2)?oldid=3131031"
Community content is available under CC-BY-SA unless otherwise noted.