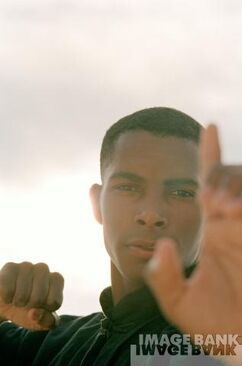 Jordan Dae is the elite Hound of Hecate in 2253.

Jordan is captain of the elite city guard, and is a stern young man, devoid of any sense of humor. He takes his duty seriously, and is unwavering in his loyalty to the city and the goddess that he serves. Jordan was raised in the city orphanage since the age of three years, and has grown up knowing nothing of the outside world around their city, other than what his instructors have told him, and has never once traveled beyond the city walls.

It is Jordan's dream to one day serve the goddess Hecate herself as one of her elite guards. To this end, he is never remiss in his duties, and even reports for work when ill. Only the insistence of the Daughters has caused him to miss a day of work. Jordan is so fanatical in his devotion, that nothing can sway him from his duty, to the point where he reports anyone who attempts to do so.

Jordan is currently hoping to be chosen in an upcoming mating ritual by the Daughter Yvana. He is quite taken by her, and believes that they will sire a male child who will be the envy of all others. He is considering approaching Yvana, but has been unable to do so.

Play matchmaker - The Prisoner can act as a go between for Jordan and Yvana, in which the Prisoner will attempt to help arrange their "marriage."

Jordan Dae was to appear only in Van Buren, the canceled Fallout 3 by Black Isle Studios.

Retrieved from "https://fallout.fandom.com/wiki/Jordan_Dae?oldid=3330705"
Community content is available under CC-BY-SA unless otherwise noted.