Jonny is missing. Find him and bring him home to Balthas 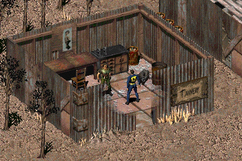 “He picks up a metal chisel and starts to wring it anxiously. To your amazement, the chisel begins to bend like putty. This guy's strong! My boy, Jonny, is missing! He went out to play a few days ago and never came back. We've searched everywhere, but still haven't found him.”— Balthas

Jonny is missing. Find him and bring him home to Balthas is a side quest in Fallout 2.

Balthas, the leather worker in town, has lost his only son. If you have Perception and Intelligence of 6 or higher, you can notice this and get the quest.

Balthas simply wants you to find Jonny. If your town Reputation is higher than 0 and your karma is above -500, Balthas will tell his dog Laddie to help you find Jonny.

Laddie will point you to the town well. Interact with it to remove the boards, then find some rope. There's some in Farrel's garden, and Jo can sell some. In the well, you can find a fair amount of coins that can be taken for -1 Karma each, as well as a BB gun with the name "Jonny" scratched into it. Take it to Balthas, and he will fall into grief. His tannery will become unavailable for use until his grief subsides (the quest is completed).

If Jonny's BB gun has already been found, Laddie will no longer "talk" to the Chosen One. He will instead, just display "Woof" in floating text.

You might deduce that finding the BB gun doesn't end the quest, because Laddie is still following you. Help Jo with his ghost problems, and head to the northeast. Discover the Ghost Farm, and find a way to get little Jonny out of the farm.

If you pick up one of the coin bags in the well, the Chosen One will say "This one, this one right here. This was my dream, my wish. And it didn't come true. So I'm taking it back. I'm taking them all back.", which is a quote from "Mouth", a character from the movies "The Goonies".

The Intelligence-10 scenario involving the discussion of aliens and of pre-War times might be a reference to the short story A Boy and His Dog (1969) by Harlan Ellison.

The entire quest is an extensive reference to the 1957-1964 incarnation of the television show Lassie. With Johnny and Laddie referencing Timmy Martin and Lassie respectively. Finding the BB gun at the bottom of the well is a reference to the running gag about the show, where Timmy falls down a well. 'Lassie_(1954_TV_series)"

Retrieved from "https://fallout.fandom.com/wiki/Jonny_is_missing._Find_him_and_bring_him_home_to_Balthas?oldid=3415710"
Community content is available under CC-BY-SA unless otherwise noted.