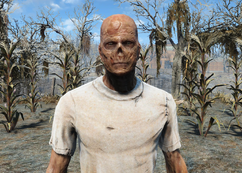 Jones is a friendly ghoul, working at the Slog alongside his ghoul brethren as a farmhand and settler once the Sole Survivor claims the settlement. Like the other ghouls present at the Slog, Jones was exiled from Diamond City by McDonough. He is spiteful about this, revealing in dialogue with Holly about how he hopes McDonough hears about the settlement's farming success and feels foolish about kicking the ghouls out. Despite this, he does not let his pettiness get in the way of keeping the Slog in working order, as Holly gently reminds him that in order to earn Diamond City's respect, they cannot allow themselves to become vengeful or hostile with their former city.

Jones appears only in Fallout 4.

Retrieved from "https://fallout.fandom.com/wiki/Jones_(Fallout_4)?oldid=3250944"
Community content is available under CC-BY-SA unless otherwise noted.