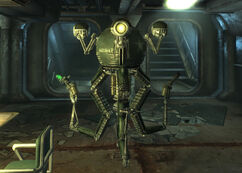 “Sir, you are not authorized to enter the armory. Sir! Please don't make me shoot you, Sir!”

Private Jones is a Mister Gutsy robot who can be found in Rivet City's Bridge tower in 2277.

This particular Mister Gutsy dates back to pre-War times. Having been disabled after the bombs fell, it was eventually salvaged and restored to a working condition by Seagrave Holmes. Jones' original programming is mostly intact - as such, he's sometimes a bit confused about where he is and who all of these other humans are. Harkness set him to guard the armory in the security tower, but he's far from being a reliable sentry.[1]

Private Jones will respawn after 3 in-game days if killed.

Private Jones appears only in Fallout 3.

A security guard may run and open the room where the turret is located, then become hostile to the player. This causes Private Jones and everyone in the vicinity to turn hostile as though the Lone Wanderer opened the door. [verified]

Retrieved from "https://fallout.fandom.com/wiki/Jones_(Fallout_3)?oldid=3444922"
Community content is available under CC-BY-SA unless otherwise noted.