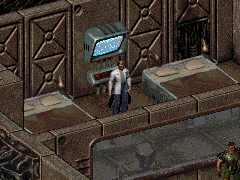 “I'm a prisoner here. Darion is getting up there in years and he needs a dedicated physician to look after him. The Khans keep me here for his needs. I'd rather be here for the people in the town above.”

Doc Jones works for the New Khans of Vault 15, albeit against his will. Serving as the personal doctor for Darion, he is privy to many of the New Khans' leader's personality disorders and eccentricities. He fell under the service of Darion while on route from Vault City to New Reno to spend his vacation. According to his story, Jones originally came from the NCR. There he trained under the local medical staff after realizing he had medical talent. After he had learned all he could, he traveled to Vault City, but was denied access. Eventually, he was lucky to meet Dr. Troy after treating a citizen outside the walls. He was allowed to gain access for medical training, but, upon completion he was captured by the New Khans.

It's unclear what his relationship with the people of Vault City was before his capture, as few people are known to leave Vault City willingly. Therefore, one might infer that Doc Jones had misgivings about his work for the people of Vault City, the citizens of the city, and/or the social structure of the city itself. Overall, Jones appears altruistic in nature, caring little if not none at all about wealth or reward, as seen by his wanting to treat the squatters above the vault instead of Darion.

After the Chosen One kills Darion, the doctor chooses to go live and work in the settlement of the squatters instead of in the Vault.

Doc Jones appears only in Fallout 2.

According to the game file Party.txt, it seems Doc Jones could have been recruited as a companion after freeing him from the New Khans.

Retrieved from "https://fallout.fandom.com/wiki/Jones_(Fallout_2)?oldid=3131021"
Community content is available under CC-BY-SA unless otherwise noted.