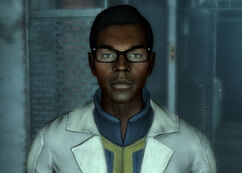 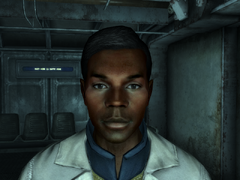 Jonas without his glasses

“Ha ha ha. You sure are! Pip-Boy and everything, look at that! If you can wait just one more minute, I think your dad will want to give you the surprise himself.”

Jonas Palmer is a resident medical technician of Vault 101 in 2277.

Wholesome, good-humored, jokey, smart, and kind, Jonas has been James' assistant as well as his and the Lone Wanderer's friend for as long as the Lone Wanderer, who got along with Jonas famously, can remember.[1] He can appear stern and strict if he wants to, but even there, his sense of humor asserts itself.

In the late 2260s, Jonas was appointed to be James' assistant by the overseer, who hoped he would be a voice of reason. Jonas and James forged a friendship very quickly and together, they worked at examining and treating patients, as well as conducting routine experiments, testing the health of the vault. For an unknown length of time, James deliberately kept his assistant in the dark about covert experiments aimed at reviving Project Purity. Eventually, Jonas grew suspicious of the physician's activities and by mid-2274, Jonas was willingly aiding James with experiments related to the project.[2]

After James escapes from Vault 101, Jonas is killed by Officer Mack for helping James open the vault and trying to escape with him.

He is the son of Anne Palmer and the grandson of Lucy "Old Lady" Palmer.[1]

Jonas Palmer appears only in Fallout 3.

Jonas, during Growing Up Fast

Retrieved from "https://fallout.fandom.com/wiki/Jonas_Palmer?oldid=3479861"
Community content is available under CC-BY-SA unless otherwise noted.