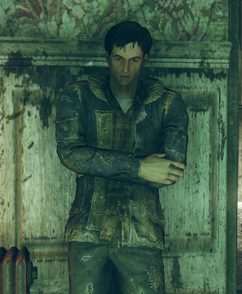 Jonah Ito is a man living in Appalachia in 2103.

An orphan, Jonah's parents died during the Great War, leaving him and his sister to survive on their own.[1]

Passing a Strength 4+ check on first meeting him to try and get him to toughen up will prompt him to refuse, but also hand over several random aid items.

Jonah Ito appears only in Fallout 76, introduced in the Wastelanders update.

Retrieved from "https://fallout.fandom.com/wiki/Jonah_Ito?oldid=3365251"
Community content is available under CC-BY-SA unless otherwise noted.