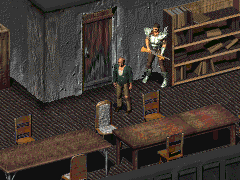 “Have you ever dealt with a vicious murdering band of thieves before?”

Jon Zimmerman is the mayor of Adytum around 2161. He hired the Regulators to help keep the peace around the Boneyard.

At some point prior to 2161, Zimmerman became the mayor of the town of Adytum. Through trickery and deceit, the Regulators convinced him that the Blades are responsible for the death of his son, Jason, who had lived outside Adytum and was secretly in a relationship with the leader of the Blades, Razor. Due to this, Jon held an undying hatred for the Blades and would pay well anyone who killed their leader. Truthfully, his son was brutally murdered and decapitated by two members of the Regulators, who wanted an excuse to get rid of the Blades for good. The Regulators's leader, Caleb also wanted Jason dead due to his relationship with Razor. After Jason was decapitated, his disembodied head was placed on a stake for Jon to see, triggering the conflict between the Zimmerman and the Blades. Much later on, Jon can be executed by his own Regulator bodyguard depending on the actions of the Vault Dweller. After hearing Razor's holotape recording of the Regulators planning to murder Jason, he is killed with a shotgun for discovering the conspiracy to destroy the Blades.

Although extremely difficult, it is possible to prevent Zimmerman's death at the hands of the Regulators:

Jon Zimmerman appears only in Fallout and is mentioned in the Fallout Bible.

Retrieved from "https://fallout.fandom.com/wiki/Jon_Zimmerman?oldid=3360707"
Community content is available under CC-BY-SA unless otherwise noted.